The past couple of years have been one of the most difficult I have had in my life. To incorporate into my awareness, for example, that African Americans and Transwomen of color meet with horrible circumstances of dying is sad.  (Trigger warning; please feel free to skip the next italic paragraph because it shares very difficult abbreviations of physical and mental harm.)

Over the past couple of years, like you, I have  had to witness these unspeakable tragedies through facebook live postings, where children in two of the cases of civilian deaths have been in close proximity of shootings. In another killing video, I watched a Black man running and being shot in the back, and in other examples, I have these memories/images, to incorporate; a black man being held down and shot in cold blood by police, another man choked to death, a teenager shot beause of dispute of playing loud music , children gunned down in schools, peaceful protesters shot with rubber bullets, bitten by dogs, sprayed with waters in sub-zero freezing.  These instances point to an unraveling of our social fabric, and a common narrative seems to emerge that under-gird these deaths.  These deaths are indicative of civil unrest, a culmination of the militarization of our police along with attempting to meet the demands of white emotional safety (in some cases). There is another strand that also ties together the murders,  powerful discontent raged by mostly younger white men who feel dispossessed.

To say, that I have been sad and awoken simultaneously would be the best way to capture my emotional and spiritual growth.

As an African American, gay man, PhD with class privileges, able-bodied, and other forms of privilege I am probably unaware of.  In this presentation, I want to be mindful of the ways in which identities can hold several spaces at once, but the amount of space held by my identities will change in any give context.

Getting further into touch with white supremacy and hatred in this country while it has mutated into different forms is mind and soul boggling. The death of black and brown lives, by intracommunal violence (as my folks in Black Lives Matter also deal with) and state sanctioned violence as indicated by multiple reports on continuing systemic issues with policing, educational neglect, financial inequities, and health disparities.  Moreover, the ways in which this violence has formed and operates, usually through a gendered and racial hostility lens that become normalized and accepted pathways to resolving social problems, makes me tremendously sad, angry, and at times, hopeless.

At once, I am struck with a sense of awe of how my people, those who share my skin color, have risked their lives through creative social protest and actions; stopping traffic while dressed fashionably (This is one of my paintings, which I really love that show African American women protesting in Chicago on Lake Shore Drive.  The women were all black, chains draped across their bodies with raspberry berets), clever signs, writing on social media platforms, organizing like all get out, and in desperate moments, shutting things down.  Their love of blackness has renewed whatever remainder of hope that exists within my moral constitution.  We can not act as if everything is usual when a Chicago black teen, Laquan McDonald can be “shot in his neck, chest, back, both arms, right leg and a graze wound to his left scalp.[23] Nine of the 16 shots hit McDonald’s back,[37] and he was shot as he lay on the pavement. [38] 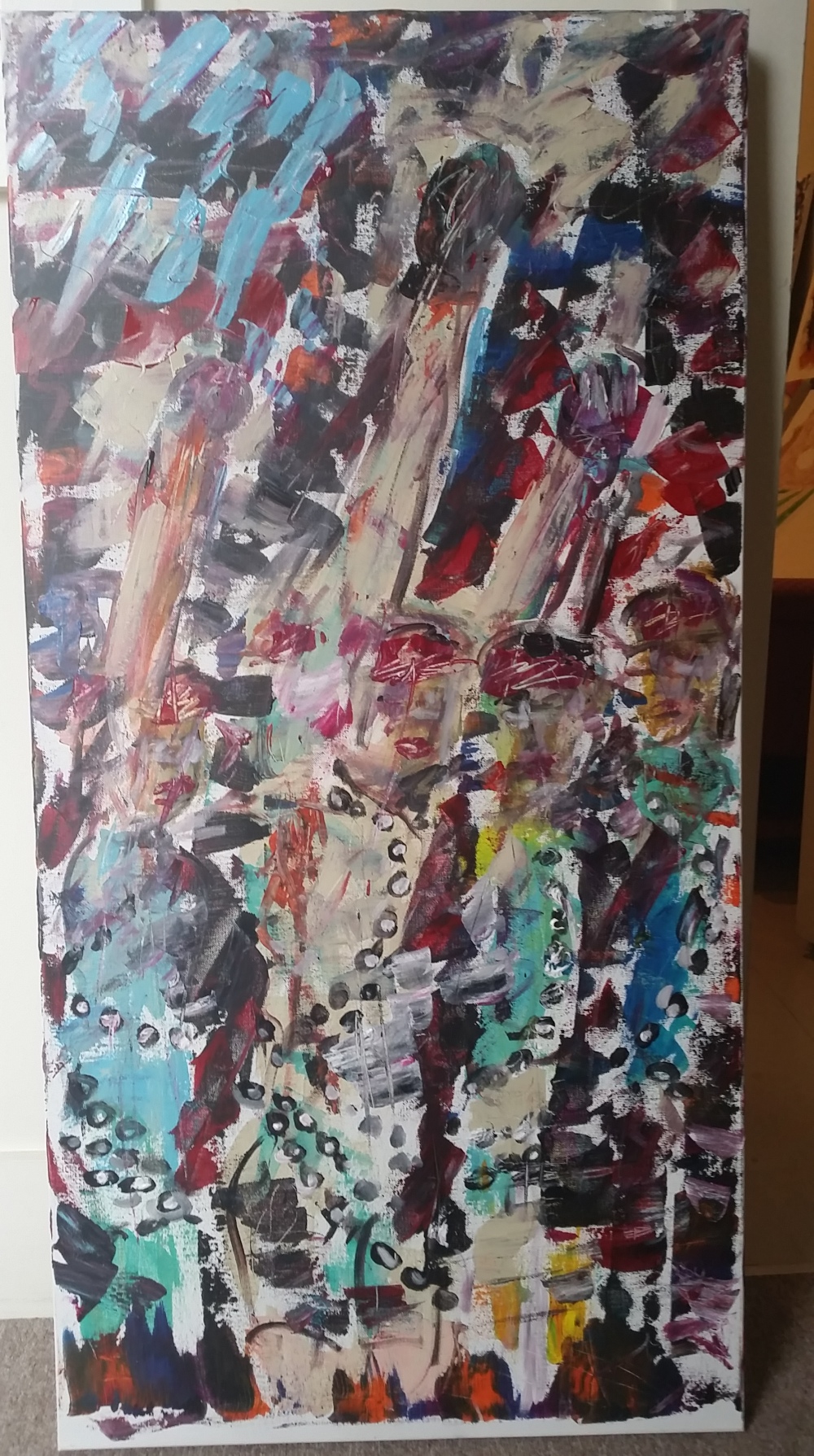 The words of Professor Angela Davis, the wisdom evidenced in their countenance and the ability to teach me about how to connect my racial identity and to allow its transformation into another way of understanding geopolitical struggle in the world has been helpful.

By this I mean, our context within the struggle that we experience at the hands of these rigid, unfeeling, and inhumane systems can be linked with people’s daily experience throughout the world.  Although my sadness can be situated within parts of my daily experience as an oppressed member of the US American society, there is a larger global identity that is or has emerged that connects me to xenophobic, racist, and sexist policies.  Racism is often embedded in the structural elements that cause war, pillage. Within the the cries and pleas of refugee and immigrant families, their lies my own experience of isolation and living in constant forms of racial terror.

When taken from the broader view, then, no wonder why this sadness and anxiety feels unusually thick, heavy, and discomforting.  That my former identity structure having outgrown their usefulness, and through the metamorphosis or awareness of my “self,” shedding parts of my cocoon, can only be achieved through this requiem or mourning. The development of my interlocking identities are undergoing a powerful change, in order for something to be born that is greater than my personal grief, this growth process feels like a collective howling. A collective sweltering of pain that has been brewing in the world for centuries that have now come to a social and psychological apex.

Through loving my blackness as a starting point, as a natural respond in understanding the depth of Black pain, this self healing embraces a legacy of resiliency and survival handed down to me by my relatives.  That my struggle as an African American is linked to an African diaspora, but can also be situated in a global perspective that includes one of the largest struggle for human freedom ever witnessed in the history of our world. And this is why the recent proposed travel ban on refugees, immigrants, and the policing of bodies is acutely disturbing and painful for many of us. Intuitively, we know that the resources that are being used to keep us safe in the end will destroy us, that fundamentally our human rights are being chipped away because of our over ingestion of hyper-masculine, male violence, and use of bodily force.

When Systems Fail, We Begin by Acknowledging That Fact And Not Shifting The Viewpoint

I have been able to see how unjust and unfair our systems are in this country.  This unfairness was apparent to me in the third grade, when my White teacher said that I could one day be President, but knew that they being a representative of the system was lying to the face of this Black child.  I carefully scanned all of the Presidents’ head portraits that were used as wallpaper borders at the top of walls. Not one of them shared my skin color. I learned that it was unfair when the dentist held me down, when I was 7 or 8,  in his chair refusing to give me more Novocaine even after I pinched his white leg as hard as I could he would not stop.  We now understand that black physical pain and white physical pain are treated differently.  Or the time when my husband who is white, and I were stopped by three white police officers after a shop clerk called them, yet they surrounded me (one in front and two behind me) and treated him as an innocent bystander by not surrounding him. Or the ways in which crack and powdered cocaine sentencing is harsher for blacks than whites. Or that across the nation, criminal evidence sits in police freezers, not be used to investigate or link the criminal to his crime.  What types of criminal evidence to police have but do not use you might wonder, over 400,000 rape kits!

That we justify the functioning and utility of these systems by saying things like there are good cops and bad cops…is a social, moral failure.  Our continued allegiance and lack of zest of changing these institutions supports the status quo, while maintaining forms of oppression that refuse to acknowledge our human diversity.  Of course, no one can argue that people are both good and bad.  Our human narratives have to begin to include the effects of how systems influence our behaviors.

But the larger issue that we continue to face is that the current systems are not effective and therefore we need to either begin to deinvest in them, or abolish them all together. I does little good to talk about good doctors and bad doctors, when we learn that taken together, both good black, bad white, good white, or bad black doctors work in systems that do not have policies in place on administering appropriate amounts of pain medication, evenly across groups of people.

Teaching our children that there are good cops and bad cops teaches them very little about how to determine who the good cops and bad cops are. How are any of us to know who is a good cop when they all wear the same type of uniform?  At a bear minimum, police officers who have 10 or more public complaints, or substantiated violations of people’s rights, should be made to wear a yellow badge or some other visual sign so that the public can know they may not operate like the other police officers.

When we encounter systems, that are failing in what they do, then we have to move beyond the individual live narratives that justify the existence of these system, and begin shifting the dollars that we invest in them.  Do you know for example, of the murders in Chicago only about 1 of 3 of them will be solved? And having the data that Whites are over-represented across the nation’s police force, “[i]n hundreds of police departments across the country, the proportion of whites on the force is more than 30 percentage points higher than in the communities they serve.” (page 12, DOJ, October 2016 report, ADVANCING DIVERSITY IN LAW ENFORCEMENT ). This means that White officers who work in heavily populated ethnic minority communities may need additional cultural training.

My point is that in order to transform our institutions it requires us to truly love them, we must care deeply for the system that powerfully shapes the behaviors of those involved in them.  On this point, if there is any way to join together police critics and those who support police this care could be a starting point. That this love and care can be a shared value that we all agree upon and then work together to change how these systems work. We must stop investing our dollars in systems that harm people. And being blind to their ineffectiveness only supports our unwillingness to be resourceful, creative, and purposeful.

Holding Spaces As Points of Departure and Collective Healing

We begin by holding space for us to heal from the trauma and terror caused by these systems. We begin by holding space for the imagination to conjure up a different world, where we can invest in preventative measures and not those that are reactive to events. To engage in a social justice language that shifts the conversation from police to jobs, jobs to homes, homes to supporting families, and so forth.  That we not remained mired in grieving but holding space for an imagined future that gets rid of the old and in bringing in the new. we restore our collective sense of efficacy.

When we hold space, we slow things down, and this action allows for something new to arise.  When I love my blackness, or queerness, or my diminishing health, within that space something grows.  Through pausing to create a holding space, this disrupts the seed of violence, it displaces violence, which is our often typical response to resolving difference, when we experience a gulf between each other.  When we love something it should afford a creative space, for something new to grow.